As one of the capital’s few floodlit, heated, open air Olympic sized pools, London Fields Lido is a perennial favourite of swimmers in Hackney. Open all year round, the Lido is particularly busy with families on warm days during the summer, but is also a firm favourite with stalwart local swimmers, who brave the outside temperaturesduring the depths of winter.

“Within the London Borough of Hackney, LFL is considered one of the best venues for the local community to enjoy and is well-loved by residents of Hackney and beyond. In fact, some of our members come from as far away as Grays in Essex,” comments general manager Martin Young. “All ages and abilities use the Lido to learn to swim, relax and most of all to have fun.”
Heated to a comfortable 25–26°C, the 50m swimming pool offers lane swimming seven days a week from 6.30am to 9pm, as well as swimming lessons for children and adults, and swim fit sessions for members and non-members.
Various group exercise classes are also available, including yoga, water workout, buggya-cise and bootcamps. Other facilities at the Lido include a café as well as a sun terrace. London Fields Lido originally opened in 1932 and was a hotspot for the local community for over 50 years until was closed in 1988.
After an 18-year campaign by local residents, the Lido reopened on October 31, 2006 following the Council’s £3 million investment to restore it to its former glory, while retaining some of the architectural style and feel of a 1930’s lido. London Fields Lido is part of the London Borough of Hackney partnership; the borough is made up of nine centres that offer a range of traditional wet and dry leisure facilities as well as West Reservoir Water Sports Centre and the Hackney Marshes Centre.
In 2014, the Council invested a further £100,000 at the Lido by installing floodlights around the poolside, to allow swimmers to swim into the evening. Martin explains: “We officially switched on the new floodlights on 1st December 2014. We also replaced the underwater pool lights with new LED fittings, all carefully chosen to minimise light pollution.” 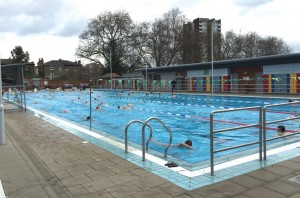 Martin is supported in his role as general manager by his assistant manager, Rafal Cymbalista, and a team of 20 staff who manage the day-to-day running of the Lido. The pool itself is maintained by the in-house duty management team and the pool water is treated using both chlorine and UV.
Martin explains: “We are proud of the London Fields Lido team, all of whom are as important as the next person. In the summer we have an additional 15 casual lifeguards that join the team to cope with the enormous increase in visits.” Putting its customers first, the Lido held a ‘Meet the Manager’ breakfast meeting in February, giving customers the opportunity to provide feedback and suggestions to both the managers. Over 20 customers joined Martin and Rafal for breakfast and discussed the progress of the centre and suggestions for improvements.
Speaking of the meeting, Martin said: “It was fantastic to hear such wonderful comments from customers on the cleanliness of the centre and how helpful the staff are. It was also great to hear such good feedback and suggestions. It is clear we have plenty to work on and I hope that we can implement the majority of these suggestions sometime in the future.”
Earlier this year the Lido hosted a number of fundraising events to raise money for Sport Relief, including a swimming challenge which saw over 400 people swim 18,000 lengths of the pool. In total over £2,000 was raised for the charity.
“This was an amazing feat and one that could not have been achieved without the generosity of our customers,” comments Martin. “All of the Team at London Fields Lido and GLL were very grateful for the amount of money raised.”
London Fields Lido Tel. 020 7254 9038 www.better.org.uk/leisure/london-fields-lido