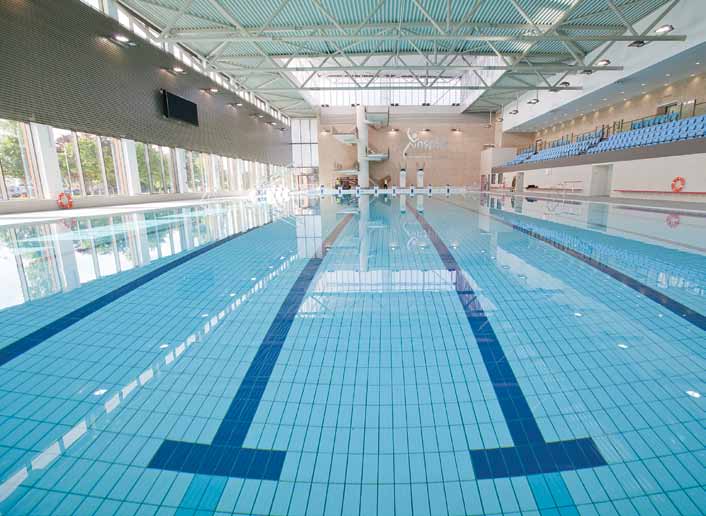 Visitors queued outside and enthusiastically joined in a countdown to the opening of the much-anticipated Inspire: Luton Sports Village this summer. More than 500 people passed through the doors within the first hour of operation to have a look around the new £26 million world class performance centre and to be one of the first in the 50m pool. The venue houses one of the best swimming facilities in the country with a world class diving facility, the largest sports hall in the town, a high quality gym together with spinning, dance and aerobic studios.

• a 20m x 10m, five lane community pool with moveable floor to cater for a range of classes and users such as special needs groups, aqua aerobics, parents and baby classes and single sex swimming

The centre also has a large sports hall capable of hosting a wide range of sports and regional competitions, a 100 station gym, dance and aerobic studio and a treatment room that will provide a physiotherapy service. Active Luton is working closely with the ASA on the promotion of the sports village, who have already committed funding a post to develop aquatic activity in Luton from early years up to elite performance. 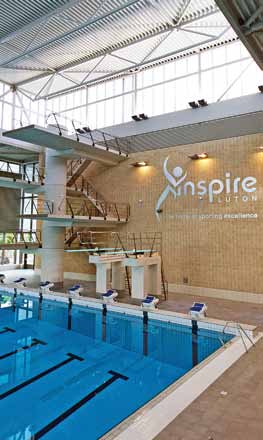 The trust has employed two highly experienced divers, Harry Glover and David Jenkins, who have trained with and been coached by the very best in British diving. Their posts have been funded by British Swimming and together they will develop diving courses where children as young as six years can learn to dive. The diving tower, the centre piece of the main pool hall, was fabricated offsite in pre-cast concrete to give it the highest possible finish. Building work by Wates started on site in October 2010 and was completed within 22 months, with the two concrete pool tanks passing water tightness tests at the first attempt. outstanding facility The outstanding aquatics facility will also be the new home of Team Luton, the town’s largest swimming club, which currently has to travel almost 30 miles to Barnet to use facilities there. Jason Brown, new projects manager for Luton Learning & Community Partnership, commented: “With the race on to capitalise on the public’s enthusiasm for taking up new sports post the Olympics, it’s great that we’ve been able hand over the Aquatics Centre on time and on budget this week. “By working in partnership with Luton Borough Council we have been able to deliver a world class sporting facility, which will not only encourage the people of Luton to increase their participation in sports, translating into health benefits, but could result in a few future members of Team GB swimming their first lengths in the pool or taking their first jump off a diving board.” The Aquatics Centre replaces a number of facilities in the area that are at the end of their economic life and which do not meet today’s accessibility standards nor the vigorous competition standards set by Sport England, and is aimed at addressing some of the serious health problems present in Luton, which has levels of obesity and type two diabetes higher than the national average.