The International Awards of Excellence recognise and reward installations of pools, spas, hot tubs and water features that reflect the most creative designs in the global industry. Here we take a
dip in some of this year’s gold award-winning designs from the U.S. … 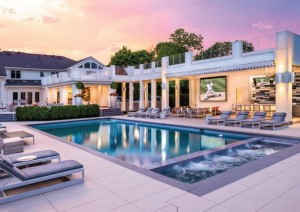 A technical and visual achievement, pictured above, this outdoor swimming pool is just as much an area for entertaining as it is for swimming. Designed by Pool Docs, the starlight pool floor features over 500 individual specs of light controlled by an LED illuminanator with a sparkle wheel. The benches in the pool are strategically positioned to allow swimmers to watch on one of the five TV’s mounted in the cabana. There are speakers mounted all around the property controlled wirelessly and the firepit is ideal for partying. 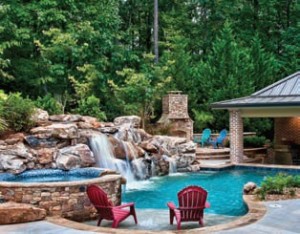 The brief for this project was to design a pool that would drown out the sounds of a nearby motorway. Selective Designs suggested a large rock waterfall that would look good and create soothing sounds. The pumps that controlled the water were variable speed up to 10hp, to allow the client to adjust the speed of the waterfall. A spa is integrated into the natural boulders with the natural rock cutting into the spa with the glass tile wrapping around the rock. The pool also includes a swim up bar that is close to the cabana where swimmers can visit people at cabana or watch the TV. The fireplace is elevated and recessed back from the cabana and the large waterfall to create more entertaining space that is connected to everything but far enough to be somewhat private. 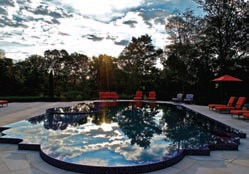 This entire swimming pool is built as a raised perimeter overflow. The overflowing water falls into a minimally visible trough built underneath the patio where it is then piped to a collection tank and recirculates back into the pool. Installing the patio stones as close to the edge of the pool as possible gives the illusion that the water is disappearing right into the patio. The shape of the pool is Roman in style with a detailed combination of curves and edges instead of the normal corners, adding interest to the design. A sun shelf and raised perimeter overflow spa adorn the side of the pool closest to the house, while a lap lane is usable down the center, and a built-in bench runs along the length of the far side. The entire overflow dam wall, sun shelf and spa are finished with a beautiful custom blend of iridescent glass tile.