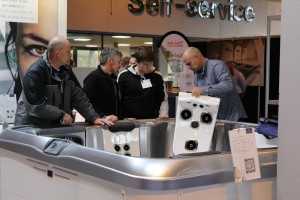 The fourth edition of the UK Pool & Spa Expo returned to Birmingham’s NEC in November, with a condensed, yet high calibre pool and spa offering.

Hot tubs dominated the line-up at the second Expo of the year, which was held in the Pavilion at the NEC from November 22 – 24 inclusive.

The event offered big international hot tub names such as Hydropool, Wellis, Vita Spa and Villeroy & Boch. Returning exhibitors to the three-day show included Doughboy, ITS Europe and Portrait Pools, as well as a number of debuts from Crown Pavilions, BRIO Group, Jo Downs and Pool-Dek.

Visitor footfall was decidedly slow, but with a high-calibre of visitors; morale among the exhibitors remained upbeat, with some reporting record deals.

“It was always going to be challenging running two events in on year and we appreciate that the show was therefore smaller than we would have liked,” commented show organiser Claire Saunders.

“Also the footfall was less than our previous editions although our marketing and PR to industry increased. 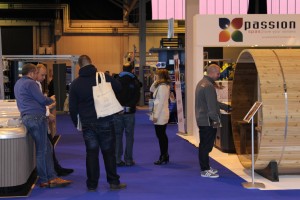 “However, we have had some very positive feedback from many of our exhibitors about the quality of the visitors who attended and have had many companies who would normally exhibit confirm they will be back for our 2016 event allowing us to grow again.”

Remaining optimistic about the future of the show, the UK Pool & Spa Expo team has already announced dates for the 2016 edition, which will run from Sunday 23 to Tuesday 25 October inclusive.

Claire comments: “Our commitment to running a good event for the UK wet leisure industry is still very much alive, we have secured dates for 2016 back at The NEC. “It would be great to hear thoughts and ideas moving forward, we have already had some great feedback and we will be reenergising the 2016 event with a new look and developing our networking opportunities and introducing hands on workshops and technical content.”

Make a date in your business diary for the next UK Pool & Spa Expo that will take place at the NEC from Sunday to Tuesday October 23 to 25 2016 inclusive.