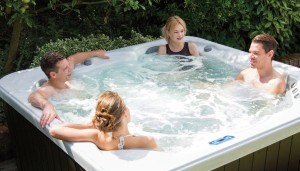 A ripple of reaction reverberated around spa showrooms in response to the Riptide Pools promotion in the April issue of Hot Tub & Swim Spa Scene. The full page advert, proclaiming US-made hot tubs were overpriced, oversold and over here was a direct reference to the war time era when American soldiers were accused of sweeping British sweethearts off their feet, becoming known as GI brides. “I did not set out to upset anyone,” responds Huw Chivers, the UK brains behind the Chinese-funded Riptide revolution. “It was meant to be good old fashioned British tongue-in-cheek humour,” he continues. “But I am glad people have taken notice. “You don’t intend to fall out with anybody but the industry has to accept the market is changing,” he reaffirms. Investing in the region of £800,000 into the UK alone, Riptide Pools are reinforcing their message about quality-produced Chinese hot tubs now available in the UK at, they claim, half the price of their American counterparts.

The Chelmsford Hot Tub Barn has become a Riptide retail footprint that is being rolled out to strategic points at Pole Hill and at Ashford in Kent, Farnham in Surrey, Alton in Hampshire, Southend in Essex and also in East Anglia with stores in Cambridge and Kings Lynn. Additionally, the first full sole Riptide dealer is now established with multiple sites in the Birmingham area. And it is not just in the UK that Riptide is setting foundations. Riptide’s parent company, Crystal Island Leisure products has been quietly establishing footholds throughout the world with acquisitions such as All Seas Spas in Holland, H2Eaux in France, and Oasis Spas in Australia, to name just a few. Huw and his wife Sarah, have been selling hot tubs out of their Chelmsford base since 1996. Entwined with the HotSpring range over a 30 year period, the couple set about re-establishing themselves after their high profile dealership failed in 2008, at the height of the credit crunch. By 2009 the pair had re-established and were building their own swim spas in the UK, but finding them too expensive to secure a stable business they travelled to China to find an alternative source. “I visited five different factories and could not have been more impressed with Crystal Island Manufacturing, an ISO 9001 company, 15with everything documented – it reminded me of HotSpring of the 1980s,” Huw reveals. “You think we work hard,” Huw comments. “The Chinese work ethic involves a six day week, 12 hours a day and you get two weeks holiday with the odd dragon race thrown in,” he says. Crystal Island Leisure Products is a company that has grown in a Chinese way, Huw explains, attracting interest from third parties as it gathers momentum to achieve its goal of floating on the Shanghai stock exchange, Huw reveals. Talks with a number of other parties are continuing throughout Europe and Crystal Island intend to have distribution and take their own product through those channels. To emphasise this, they will have a major showing at the forthcoming Piscine show in Lyon. 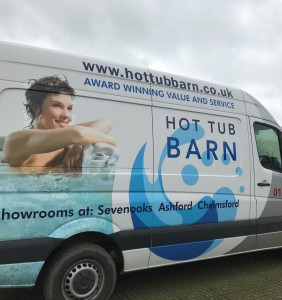 Huw worked with Crystal Island Leisure Products to come up with an inventory of moulds that would ultimately create four separate brands; the entry level Urban Lite that is a 2kw plug and play. A next level price which is the Heritage, then the Prestige topped by the highest priced Startlite range. All Riptide models feature LX 300 LP pumps, Gecko circulation pumps and a Gecko control box, Huw confirms. “The Riptide moulds are influenced, of course, from my history with HotSpring, ” acknowledges Huw. “HotSpring brought me up. Whoever trains us, that is our ‘go forward’ model whatever role we are in,” he acknowledges. “The Chinese will build whatever you want. You can specify an inferior spa in China but equally, you can create an American standard specification too,” he continues. APPROACH “It is exactly the same product but the labour rate is 50% of cost of American labour. Add to that the shipping from China is only four weeks and again less expensive than shipping from the USA,” he points out. “It all adds up.”Huw insists the quality of Riptide models are equal to their American equivalents but can be made available at a beneficial price. “We are playing a different retail game,” says Huw. “Almost without exception the other operators in the UK will have very high RRPs and there will be considerable discounts offered on the day, for a quick decision. It is high-pressure and old school,” he says. “Our RRP prices are very attractive but the margin for negotiation is very low.”

Huw is calling on the trade to wake up to a level of Chinese product that is comparable and is cheaper. “The big brands are chasing each other to be top dog, but it is just a price game,” says Huw. “I believe they are actually stifling their own business because they will frighten off a prospective buyer, with such high RRPs, they are not even going to knock on the door,” he says. “At last money is flowing back from China to Europe and the UK,” says Huw, who continues: “We don’t hide the fact that the Riptide range is Chinese. Why would we? Our phones, computers — all our household appliances — are made in China.” Huw continues. “There is a mentality that Chinese-made is an inferior product,” he adds. “There are definitely some lower grade manufactured spas out there but the Riptide brand can hold its head up with anyone,” says Huw.“Consumers don’t have Chinese prejudice, they only get it if they visit dealers that are selling North American product. “That’s the only time consumers even start to think there may be a difference,” said Huw, adding: “The days of American Hot tub superiority are numbered because the market is evolving and, like it or not, the Riptide range is a worthy comparison.”