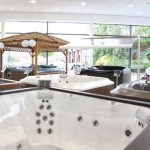 When would-be businessman, Paul Margerison went to his local bank to ask for backing for an idea he had for selling hot tubs – he got more than he bargained for.
So impressed was bank manager Kevin Newby with Paul’s plans that he decided to buy into the idea himself.  The pair became business partners establishing Outdoor Living from a rented unit
in Beverley in 2004.
Seven years on and Outdoor Living has just opened the doors to its second prestigious hot tub showroom; they have a customer base in excess of 3,000 and are selling the sort of numbers that would make most hot tub retailers green with envy.
“We sold our first 50 spas at cost and spent £60,000 on advertising just to get the business going,” admits Kevin, who thinks other retailers are too tentative when it comes to
marketing.
“When other retailers tell us they sell 20 or 30 hot tubs a year, we are not quite sure what they are doing – we do that every month,” says Kevin, who now works full time on the business
alongside Paul.
The Outdoor Living showroom in Hull stocks a combination of Arctic, Artesian and Jacuzzi spas from an outstanding location on a busy road that sees about 60,000 cars pass by daily. A second showroom, now open in Leeds, is a dedicated showroom selling only Jacuzzi product.
“Jacuzzi is simply the only hot tub brand that everybody knows not just in the UK but around the world,” says Kevin.
“If you sell any product against Jacuzzi you are going to struggle and when we got the opportunity to open a dedicated Jacuzzi showroom, we grabbed it with both hands.”
It is a winning combination. The pair were named Jacuzzi Retailers of the Year at the recent UK Awards and employ a team of ten on sales, installation and service. “If you want to be big; you have to think big; it is simple really,” says Kevin, who reveals that hot tub sales represent only 25% of the company’s total turnover.
“A quarter of this business is selling tubs; the rest is looking after them and that is where people go wrong. I did a calculation to estimate how much each customer spent on chemicals a year
compared to our turnover.
“We have lost a few but we have gained more because we actually get more customers than we ever sold hot tubs to.”
The pair is resisting offers to open a third showroom as they would now prefer to consolidate. Working county shows and two showrooms, the pair barely take any time off during the summer
but look forward to taking holidays in the quieter, winter months.
Says Kevin: “According to official government figures, the recession finished on January 26, 2010.
“Ever since then, the country has been growing – it is just a question of attitude.”
Outdoor Living Ltd
Tel. +44 (0)844 543 6002
www.outdoorlivingltd.co.uk