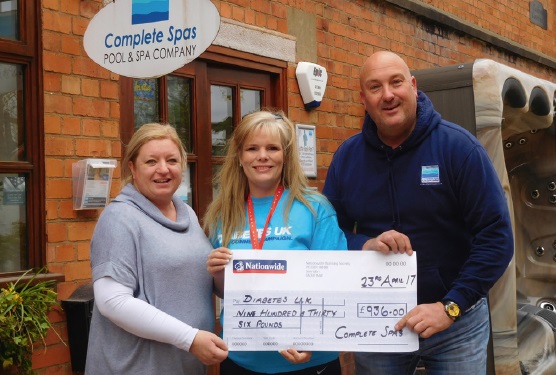 Hard work and determination has proven to be a winning formula for the husband and wife team behind Complete Spas.

Celebrating their tenth year of trading this year, Pete and Rachel Grinnall started selling hot tubs and swim spas in the summer of 2007, just as the last recession began to take hold.

Not afraid of a challenge, the idea for the business came about after the entrepreneurial pair tried to upgrade their ‘spa in a box’ that they had owned for two years, to a ‘proper’ hot tub. With £5,000 in cash in their pocket Pete and Rachel visited three local retailers with a view to purchase a hard shell tub, but unfortunately no one seemed interested in selling them one for less than £8,000.

A few months later the couple visited the Spring Fair at the NEC where they met a Canadian spa distributor. They not only purchased a hot tub, but they also discussed the idea of becoming dealers. “Upon setting up Complete Spas, Rach and I decided from the beginning to work on a few simple rules,” Pete explains. “Firstly no hard sell. Secondly always have a spa for under £5,000 and finally be able to complete or at least organise the whole installation process.”

Based in Worcestershire, Complete Spas specialises in all areas of spa retailing including, service and repair, hot tub hire, holiday hot tubs and commercial spas.

To find out more about Complete Spas renovated showroom and the UK Pool and Spa Awards, subscribe to Hot Tub & Swim Spa Scene