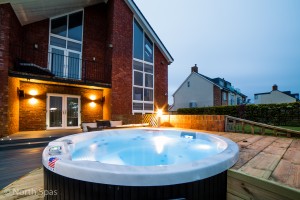 This stunning project by North Spas was named the overall winner of the Hot Tub of the Year category at this year’s UK Pool & Spa Awards.

The client enlisted the help of the North Spas team to redesign their outdoor living area. They felt that their large deck, which featured a 7ft sunken hot tub, was no longer safe and they wanted something totally new.

During a site visit, North Spas discovered that the decking had not been treated since its installation over 10 years ago, which had caused the timber to rot and discolour. Not only that, the technicians also identified a major leak on the hot tub’s pump, which had caused corrosion around the major parts and waterlogged the foam insulation, making it impossible to move using an air bag.

While using a crane to remove the old hot tub would have been more convenient, the client was keen to keep costs to a minimum so the team took the decision was taken to remove it by cutting it into small pieces.

After installation, a bespoke and extremely intricate two tier curved step was created surrounding the front of the hot tub. The electricians carefully planned the position of the lights to flood the clients relaxing retreat with the perfect ambience.

“This project is totally unique and is one of the most intricate and largest projects North Spas have completed,” reveals Samantha Murphy of North Spas.