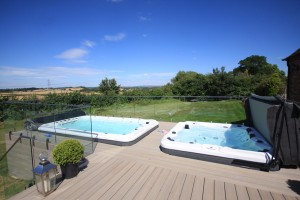 Earlier this year Bespoke Buildings & Spas were approached by a client who was looking for a swim spa for the garden of his converted barn in Worcestershire.

Andrew Newsome of Bespoke Buildings & Spas explains: “The decision to use two separate units was something that customer had not thought about.

“The combination of two units avoids the compromise associated with some swim spas. We felt it gave better seating configuration for the hot tub area and allowed a space between the two units to enable the adults to relax whilst children were swimming. The seat orientation also takes advantage of the far reaching views over the surrounding countryside.”

The client had already chosen his decking contractor who specialised in minimalist glass balustrading, so Andrew and his team set out and laid the groundworks to ensure that the spas sat at the same level. Provision was made for access panels to gain entry to the enclosed equipment, pumps and controls. The 4m dedicated swim zone features built-in rowing attachments, steps for easy access and a powerful four pump jet package.

The hot tub was chosen at the exact same width dimensions so that the two units blend well together. The roller cover on the swim spa makes access very simple, and the hot tub features a hydraulic cover lifter to enable all of the family to access the spas.