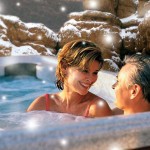 European and North American spa and hot tub manufacturers
could be wiped out within 18 months by Chinese-sourced pirate
copies of their designs on sale at knock down prices.
Some China-based companies are simply ripping off Western
brands and producing products that are often promoted with
material and direct images lifted from Western brochures and
websites – even in some instances – using the same product codes.
The rogue trading is being undertaken by companies that
are incurring no design or development costs, nor, are subject
to no quality audits, while the working conditions, wages and
environmental practices employed in manufacture would
have Western business operators facing heavy fines or even
imprisonment.
While the companies importing these cheap imitations
are simply selling and disappearing; the only winners are
unscrupulous ‘here today, gone, tomorrow’ importers.
”We were approached by a Chinese manufacturer offering us
a range of spas and gazebos,” reveals Stephen Crabb of US-made,
Catalina Spas.
“On checking, many of the products they were offering were
marketed using images that were lifted directly from our own
brochure.
“In one instance, they had not even removed the Catalina logo
from the headrests,” Stephen continues.
“They had an image of a gazebo in their brochure that was
taken of our stand at that year’s Lyon pool show! It even had a
member of our sales team in the picture!”

Rob Stirland of Artesian Spas had a similar experience: “In some ways it is a compliment that they want to copy our products.
“The problem often occurs that the copy is perceived to be the
real thing and it can be difficult to educate the consumer of the
difference, as externally, they look very similar,” says Rob who
estimates the copycat practice has been building over the past seven
years but with a tangible increase in pace over the past 36 months.”

Look out for the October issue of Pool and Spa Scene for the in depth report!