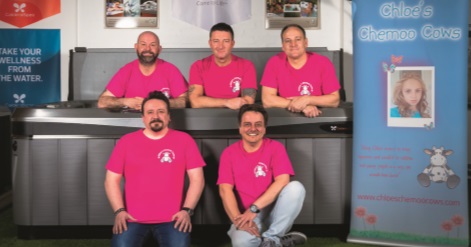 Caldera Spas Scotland chose to mark their tenth anniversary by sponsoring a charity cycle ride from Land’s End to John O’Groates in aid of a local charity – Chloe’s Chemoo Cows. The charity was set up in memory of 11-year-old Chloe McNeil who tragically passed away from a brain tumour.

Her parents Mark and Elaine started the charity mission in 2011 to raise much needed funds to brighten the lives of children with cancer.  Upon hearing about their latest fundraising initiative, the Caldera Spas Scotland team offered to cover all the costs for the charity cycle ride, which took place at the beginning of July.

This included providing clothing, support vehicles and fuel and accommodation for the duration of the trip. Caldera Spas Scotland also promoted the event in store, on their website and on social media. “Over the last few years we have paid to advertise, however, this year being our tenth anniversary we decided to put that money towards helping a sad but fantastic cause,” explains Yvonne Hamilton of Caldera Spas Scotland.