Cornwall is famed for its world-renowned beaches, which make one of the UK’s leading holiday hotspots. In fact, it is estimated that the population of Cornwall trebles in some areas during the peak season. With a vast amount of holiday parks and accommodation lets across the county, and with hot tubs increasingly becoming a must-have item for holidaymakers, it’s no wonder that Cornwall’s hot tub sector is booming.“The hot tub market in Cornwall is growing and will continue to expand,” comments Brian Kennelly, Director of Spyrys Spas & Hot Tubs, based in Wadebridge.
“The population of Cornwall is growing as increasing numbers of people move to the county either to retire or to make a lifestyle change, and it’s these potential customers that can really reap the benefits of hydrotherapy that hot tubs offer.”

HOLIDAY ECONOMY
He continues: “Added to that, the holiday economy in Cornwall is thriving. Indeed hot tubs are now a key search criteria for anyone looking to book a holiday.” Far from being a seasonal destination Cornwall has yearround appeal, which means that the county’s hot tub companies are kept busy throughout the year. The winter is traditionally a quieter time for hot tub retailers, but that’s not the case in Cornwall as many holiday properties use this time to plan ahead and invest in their accommodation offering for the following year. Tim Roberts of Cornish Hot Tubs says that seasonal fluctuations have become less noticeable in recent years: “Generally from March we are busier as people get out into their gardens and start to think about the prospect of a hot tub. August can be slightly quieter for sales as people living in Cornwall are often reluctant to battle through the traffic to go hot tub shopping or are too busy with their own seasonal businesses. Often we see a surge either side of the peak holiday season.” While the holiday sector may keep the county’s hot tub retailers busy, it also brings with it its own set of challenges, along with regulatory compliance and commercial pressures. Tim explains: “In the peak season it can be difficult to navigate through the holiday traffic generated by the extra visitors so we have to plan as best we can, allowing extra timeto get to appointments.” He adds: “Cornwall’s unique location and landscape also presents some interesting challenges for deliveries with cliff top locations and narrow single track winding country lanes. But the Cornish always seem to find a solution one way or another!”

HUMBLE BEGINNINGS
From humble beginnings, the family run Cornish Hot Tubs is one of the largest suppliers of hot tubs in Cornwall and was recently named Spa Retailer of the Year at the UK Pool & Spa Awards.
The team of seven is headed up by Directors Tim and Emma Roberts. Tim is assisted in Sales by Paul and installations are carried out by the company’s two full-time engineers, known as ‘The two Matts’. Meanwhile David and Ian manage the deliveries and take care of commercial water changes. “We are finding the market buoyant at the moment with people keen to spend their hard earned money on the little luxuries in life,” comments Director Tim Roberts. The company offers customers a wide variety of hot tubs from manufacturers including American Whirlpool, Superior Spas, Catalina and Marquis Spas. The American Whirlpool 471 is their bestselling hot tub. “Our reputation serves us well in Cornwall with many of our customers coming through recommendations from existing customers,” comments Tim. “In the modern world we live in we also market through social media with a great response. You will often see ‘Hot Tub Tim’ on Facebook doing a live video, promoting events, explaining features and benefits of the spas we sell and tips on how existing customers can keep their spa in top condition.” The team is getting ready for County Shows over the summer months, the largest being the Royal Cornwall Show in June, which attracts in excess of 100,000 visitors. Cornish Hot Tubs also have a large project underway supplying hot tubs for a local luxury holiday park.

BEST SELLERS
Located in Truro, OC Spas has a selection of Artesian hot tubs and swim spas on display, as well as chemicals from CPC and Aquasparkle. Their current best-selling hot tub model is theNevis 45 from the Island Spa range. “We sell Artesian Spas exclusively, and do not offer any other hot tub brand. We are committed to selling the best and do not want our clients to feel that we have split loyalties to our suppliers,” explains Director Lucy Bottrell. “We believe that Artesian offer the best hydrotherapy and they are so reliable. We also like the fact that Artesian hot tubs are stylish, ergonomic, economical and use trusted manufacturers for all components.” OC Spas was formed in 2015 by husband and wife team, Jonny and Lucy Bottrell. Now a team of five, Jonny oversees the all technical aspects of the business and Lucy is responsible for the day to day running of the showroom and liaising with all clients.

WORD OF MOUTH
“Our best form of marketing is by far word of mouth. The people of Cornwall very much rely on their friends’ recommendations so it’s really important that we uphold our reputation as a trusted hot tub supplier,” says Lucy. Continually looking to grow and improve the business, OC Spas now have another branch of the business called OC Heat & Electrical, comprising a team of gas engineers, plumbers and electricians. “The spa market is better than ever,” reveals Lucy. “People are very keen to improve their mental and physical well-being and a spa is perfect for this. We’re so much busier than this time last year – we have even had to take on more staff.”

Spyrys Spas & Hot Tubs is now in its seventh year of trading and was set up by husband and wife team Brian and Sharon Kennelly. Initially the couple set up the business with Arctic Spas, but have since expanded to include Vita Spa and also Superior Spas. Their bestselling hot tub model for the past three years has been the Vita Spa Prestige. The company has also recently partnered with O-Care for their water care products.

“When choosing suppliers we are looking for three main attributes; engineering design, build quality and after sales support,” explains Director Brian Kennelly. “We have managed to find three complimentary manufacturers with similar design approaches and manufacturing ability and comprehensive warranty and spares support in the UK. This is very important to us as we want long term relationships and products that we can be proud to sell and are confident that we can look after for our customers going forward.” Covering Cornwall and most of Devon, the Spyrys team is gearing up for a busy summer season as more domestic users look to improve their outdoor areas.
Says Brian: “We see the purchase of a hot tub as the start of a relationship, and this approach to customer care generates a lot of further business through referrals and recommendations.” He continues: “I think it’s clear that the benefit of social media and website marketing has overtaken print media in terms of importance and effectiveness. “However, it is hard for potential customers to fully appreciate the quality of our hot tubs over other alternatives through online images, so the challenge is getting them into the showroom to see for themselves.”

Top Cornish Trivia
• The population of Cornwall is around 536,000 but fluctuates with peaks in the holiday season with Cornish beaches attracting more than five million annually
• The pasty has been a documented part of the British diet since the 13th Century, and the term “Cornish pasty” has been given protected status by the European Commission.
• Cornwall boasts the longest coastline in Great Britain, extending 433 miles.
• There are more than 75,000 cows in Cornwall, making Cornwall famous for its ice cream.
• In the 1900’s, half of the world’s tin came from Cornwall 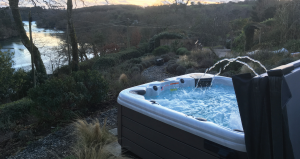 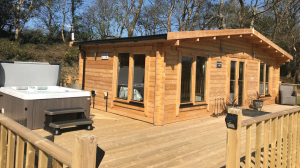 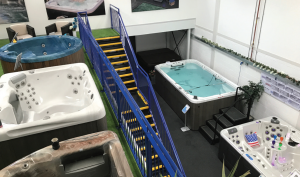 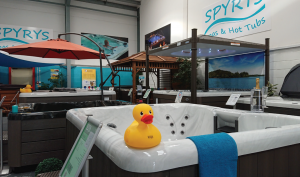