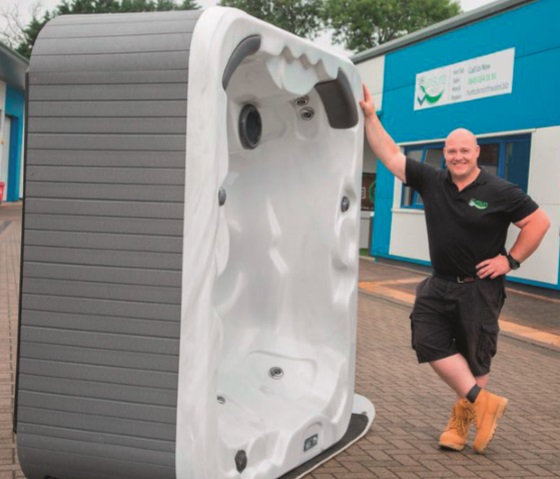 Hot tub specialists, UK Leisure Living, has doubled the capacity of its North Wales base with the recent opening of a new hot tub showroom.

The new show centre at The Creamery in Mochdre, near Colwyn Bay, boasts between 15 and 16 hot tubs and a swim spa on display at any one time. UK Leisure Living officially launched this summer,  selling six figures worth of spas over the two days, making August their most successful ever month in sales.

At more than 2,220sq ft. it is twice the size of their existing premises on the same business park. Boss Gareth Jones says the growth of UK Leisure Living is fuelled by the increasing popularity of solar-powered hot tubs at holiday parks and cottages. He said the booming business had taken on an extra four members of staff in the past three months, taking the team to 15-strong.

“That side of the business is taking off big time and we do a lot of work with many of the top lodge parks like Plas Coch on Anglesey and Hafan-Y-Mor in Gwynedd, as well as many of the small independents and holiday cottage businesses including one of the UK’s largest holiday cottage companies Sykes,” comments Gareth. The move coincides with UK Leisure Living being appointed as Hot Springs dealers.

Comments Gareth:  “Hot Springs is complementing our extensive range which means we have hot tubs and swim spas to suit every budget, with hot tubs starting at £2,750 and available for delivery within seven days.”