Superior Spas has demonstrated why it is the UK’s fastest growing hot tub brand after winning five awards at the UK’s Pool and Spa Awards. The team collect five gongs, including picking up the prestigious UK Supplier of the Year award. It also collected a Gold Standard award for the UK team of the year, a Silver Standard award for its Derby showroom, and two Silver Standard Spa Products of the Year awards for the Zeus Swim Spa and the Be Well Hot Tub Range. “Winning the UK Supplier of the Year title was particularly special and really reflects how far we have come in the last 12 months,” Sales Director, Gareth Ward, commented. “The recognition is testament to the hard work we have put in and the support and efforts of our suppliers, dealerships and showrooms.” Rob White, Superior Spas Head of Marketing agreed: “We have always said that our products are world class and certainly, collecting two Products of the Year awards underlines that quality. It’s a wonderful end to the year and sets us up perfectly for lots more growth in 2019.” 2019 certainly looks set to be a huge year for Superior, who recently unveiled their brand new manufacturing facility in China. At 400,000ft2, it is believed to be the largest hot tub manufacturing facility in the world. 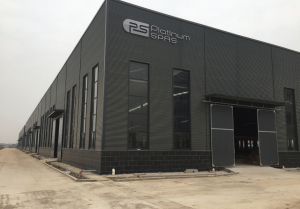 As a result, Superior will be able to increase production with capacity for 100,000 spas a year. Offering three ranges of spas themselves, Superior will be able offer dealers the opportunity to have their own range of spas built. “We have been working with Sunrans manufacturing facility for over six years,” says Rob White. “The manufacturing of our spas will be made using state of the art equipment and robots ensuring every spa is made the same.” Rob explains: “Our quality control manager will be visiting China once a month to check on quality and make continuous improvements.” In addition, part of £1.5 million investment, a new distribution centre with its own showroom is due to open at the end of 2019. Able to stock up to 800 spas will make it the largest distribution centre in the UK. Rob continues: “We are producing large distributors own brands of spas including contracts with Sykes and Costco. Our aim for 2019 is a 50% growth on 2018; aiming to sell 6000 spas in 2019.” Contact the team to find out more or visit SPATEX, taking place at the Ricoh Arena in Coventry from January 29 – 31 where the team will take up a prominent position.