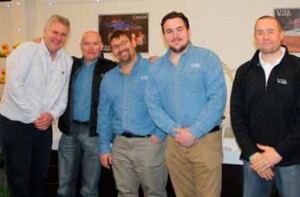 One of the hot tub industry’s biggest climbers, Vita Spa UK continues to gain market share peaking at a 40 per cent increase in overall sales in 2013. In fact, the Vita Spa label has been available in the UK since the mid-1990s experiencing a few false dawns as a few would-be players, dipped a tentative toe into the import and distribution route.

Although many spas were sold, the brand never hit the numbers some other brands were achieving and eventually Richard Hart of Aqua Warehouse and Aqua Spa Supplies, took the reins in 2007. Under the guidance of Richard over the past seven years, the Vita Spa UK distribution has grown with the help of a dedicated and productive dealer network, promoting the Vita Spa product through some challenging times. Literally kicking off as one man and his dog…Richard and Bella – a golden retriever cross poodle – otherwise know as a Golden Doodle!

The Vita Spa team has grown into a tight-knit, dedicated team who make the cogs of the business run smoothly at the Essex-based showroom. Sarah keeps tabs on the finances, John runs the warehouse and stores department, Dave, Brett and Russell undertake servicing and deliveries and Graham works alongside Richard on dealer support.

“We are continuing to grow at quite a pace at present and with further rapid growth expected we are once again looking to add to our workforce” comments Richard.

Vita Spa was acquired by The Brookfield Group in 2009, a global company and the parent company of the Maax Spas Corporation. The acquisition saw the production move to Arizona, where Vita Spa is still manufactured today.

“The Vita product has evolved during this process and the product we sell today is manufactured in a totally different way which has helped the brand develop further,” says Richard. “We are incredibly fortunate with Vita Spa as they produce a large selection of models that cover all price brackets – we are like a one stop shop.”

To read more of this story, please subscribe online.