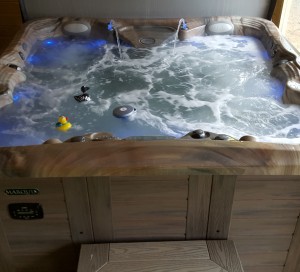 Lincolnshire-based 1 Stop Spas lived up to their name when provided a one-stop shop for the customer, undertaking the design, planning, supply, coordination and installation of the whole project, therefore reducing costs for the customer and ensuring a speedy completion.

The client had visited the 1 Stop Spas showroom 12 months previously, having been impressed with projects he had seen on the company’s Facebook page. He was looking to purchase a dual-temperature swim spa to go into a cabin, which he was planning to buy online. At the time, the customer had concerns over having to coordinate the project as he had limited time available, but was keen to try to ensure he could do it all within his budget.

The swim spa is housed in a bespoke log cabin made from Nordic Spruce, which was designed and built by 1 Stop Spas.

“One major part of the consultation was deciding on whether the swim spa should be dual-temperature,” says Chris Brady of 1 Stop Spas. “After discussions, we decided that it might be just as cheap and more versatile to go for a swim spa that offers a large swim area rather than seating and then have a separate hydrotherapy spa. This is the option that the customer decided upon.”