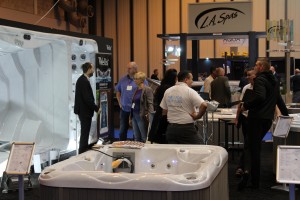 The new-look Hot Tub Living Expo returned to Birmingham NEC in October, bringing together some of the UK’s leading spa manufacturers and retailers.

Exhibitors went to great lengths to showcase a wide range of products and services at the two-day show. Among the stand-out exhibitors were Wellis, Passion Spas, 1 Stop Spas, Spa Solutions, Pollet Pool Group and the Aqua Warehouse Group, who won the ‘Hot Tub Living Expo Special Award’ for their innovative stand styled from wooden pallets.

As well as an array of hot tubs and swim spas on display, the Expo introduced an outdoor living element to the show this year, featuring outdoor furniture, hot tub screens, heating, spares, chemicals, pool covers, and other ancillary products.

A highlight of the Hot Tub Living Expo was once again the Great Hot Tub Debate, which featured a panel of industry experts including Lloyd Burden of Hydropool, Rob Carlin of Superior Spas, Chris Brady of 1 Stop Spas, Roel Fassbender of O-Care and Richard Hart of Aqua Warehouse.

Lloyd Burden began the discussion, with his take on how the industry has performed in 2016: “This year has been another record year for hot tub and swim spa sales. Most of the big industry players are quoting 20 to 25 percent growth this year, which is amazing following the record year of 2015.”

From a retail perspective, Chris Brady added: “We hoped that 2016 would be promising and it has delivered. There was and still is some uncertainty about how Brexit might affect us, but we haven’t had any dip in sales as a result of it yet. Sales of swim spas in particular has been very strong and the top end sales have been good.”

Richard Hart agreed: “Swim spa sales have been incredible. Dealers that have taken the plunge and added a swim spa to their showroom are reaping the rewards. We’re also finding that customers are not only investing £20,000 in a swim spa but they’re also then adding a £10,000 Covana cover. The budget is there and we’ve got to capitalise on it.”