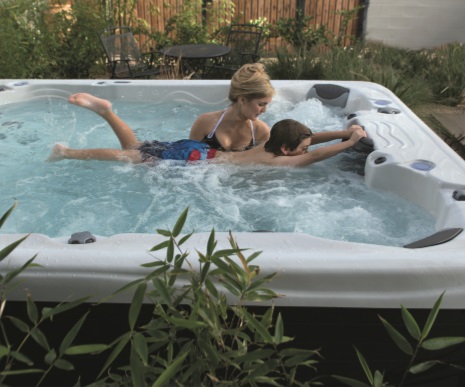 tsteps of 2016 with another record breaking year for hot tub retailers predicted.

Following steady growth in the market in 2016 and early 2017, targets are set be smashed across the board, and some of the industry’s biggest brands are reporting increases up to 30 per cent. Graham Message of Aqua Warehouse predicted growth continuing into this year, despite the potentially destabilising effect Brexit could have on British trade. However, there has been no any dip in sales – with hot tub sales in mainland Europe also up by 20 per cent.

Says Graham: “We’re selling a real mix; the Prestige is very popular – going for about £8,500. We’re up on the ﬁrst six months of last year but the last quarter of 2016 was incredible. We’re doing our best to keep up with demand and I think we will be on par this year. I’ll be disappointed not to match it.” Earlier this year Aqua Warehouse Group launched two brand new 18ft dual temperature swim spas for the L.A. Spas and Vita Spa brands.

Speaking at the at the Aqua Warehouse Group dealer event, Managing Director, Richard Hart said: “Our largest growth in sales over the last few years is in the swim spa sector where I feel we have gained good market share. I only see the introduction of the two new models adding to this growth.”