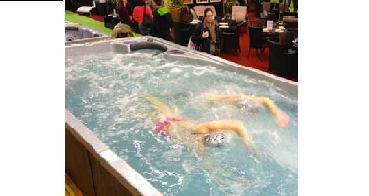 Team work paid off for the Hydropool UK team as they reported record sales at the Ideal Home Show for the third year in succession. With up to 17 sales personnel staffing the stand at the annual Earl’s Court consumer home show, Hydropool were taking no chances, completing the huge display area a day earlier this year to allow the entire team to take part in a bespoke pre-event sales training day. “On the day before the event started, we booked one of the upstairs rooms at Earl’s Court for a sales training day 0that was focused on the psychological element of sales and how to use your own and others’ energy levels including reading body language,” Jonathan revealed. “It was expensive and difficult logistically to get it organised but very beneficial and got everyone focused and tuned-in for the start of the show.”

Becoming more sophisticated every year, there was a conscious effort by Hydropool to improve the quality of branding and overall stand image, part of Hydopool’s exclusive hot tub deal with the show organiser’s Media Ten. This year’s vast display was realigned to facilitate a sales journey through the best-selling, self-cleaning hot tub models through the Lazy Boy brand and, if all else has failed, a couple of entry level spas to try and clinch a sale on the day. We added a reception desk this year and a small team of hostesses,” Jonathan said. “We wanted a less intimidating point of contact for visitors to the stand with the opportunity for the hostesses to qualify the person as to where they were on a purchase journey. “It is all about team work,” Jonathan explains. “Every morning and every evening were book-ended with team meetings where we discussed daily goals; made observations and talked through every aspect as a focus to do better,” he added. “There were daily champagne giveaways for the top salesman but it is not just about sales and there was a daily award for the best achiever; the man of the match, as decided by a team vote, who may not have scored most goals but will have worked the hardest,” Jonathan said. The sales team, known as ‘presenters’ worked the stand showing a spectrum of choice in terms of specifications, price and sizes. Prospective purchasers were then passed to a specialist team of ‘negotiators’, in a segregated VIP area with soft seating, drinks and a relaxing closing environment. This year, Hydropool’s self-cleaning range was the flagship product, outselling everything else, Hydropool reports, compared with last year that was heavily swim spa biased. Hot tubs generally were selling in high volume with the surprise element, a complimentary barrel-shaped sauna that was very well received. Highlights of the show included a celebrity appearance by Sharron Davies, daily swim spa demonstrations, including a side by side demonstration by two swimmers in one swim spa and a high profile visit from the charity fundraising group, The Sisterhood.