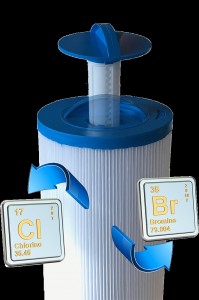 Darlly Europe, the UK’s leading supplier of replacement hot tub filters, have created a competitive and effective solution for HSG282 compliance for the majority of hot tubs on sale in the UK with the launch of their new SaniStream Direct Line Filtration System.Philip Moseley and Gil Gingell, directors at Darlly Europe, envisage that more than 90 per cent of their replacement filter offering will be able to accept the SaniStream dispenser in the coming year, to allow the majority of spas sold in the UK to be converted to the SaniStream Direct Line Filtration System. Not only will this open up the holiday let market enormously, but Darlly forecast considerable demand for SaniStream from the home spa sector. SaniStream is an inline dosing dispenser which allows for the continuous dosing of chlorine or bromine tablets or bromine granules. It is fully adjustable to allow for the regulation of sanitiser flow depending on the demands of the particular spa it is fitted in, and it does not require the modification of any of the hot tub’s existing plumbing. It can be filled and, more crucially, refilled with regular suitably sized chlorine or bromine tablets from the client’s regular supplier. SaniStream Direct Line Filtration System is designed to install in the void in the centre of an adapted Darlly filter cartridge, so that dosing is inline and continuous whenever the spa is in a filter cycle or in actual use – satisfying the key demands of HSG282 compliance. For example, the SC714 filter (also known commonly as PWW50), which fits 30% of all spas installed in the UK and is the most common filter sold in the country, will have a removable top to allow the SaniStream dispenser to be removed for refilling and reinstalling in the spa.

The design also allows easy access for inspection, refill or replacement, while keeping it locked away out of sight of consumers using the spa. The Health & Safety Executive’s recent publication ‘The control of legionella and other infectious agents in spa-pool systems’, more commonly known as HSG282, sets out specific and detailed guidelines for hot tubs installed in holiday let situations and places risk responsibility on holiday let owners and operators to ensure their installations are HSG282 compliant. Section 76 of HSG282 deals with the specification of hot tubs installed in such a setting where used as part of a business activity.