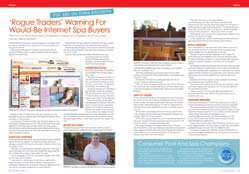 An estimated 550 claimants, including 130 members of the consumer action group, Friends With Claims Nationwide, are being kept informed, as the police investigation against Internet spa sellers, the Trade Price Hot Tub Group continues.
It could be some time before the case reaches a conclusion as members of the Staffordshire fraud squad systematically work through 550 statements involving claims against the on-line traders.
In a pre-planned operation in November, five people were arrested at residential addresses in Stafford, Sutton Coldfield, Bassetts Pole and Tamworth on suspicion of conspiracy to defraud. Simon and Katie Foster, Stuart Cox, Jonathan Husselbee and a fifth person, are all connected with the Trade Price Group that sold Chinese manufactured spas via prominent web sites. The five have been bailed pending further investigation. No formal charges have yet been made.
“We have 130 members in our group but there are thought to be more than 500 cases across the country in the last 12 to 18 months,“ says Kay Waterman, the founder of the action group, who has taken on the Trade Price Group with ‘terrier-like’ persistence.
“This is not down to one person; we have all worked hard together as a group to bring these people to justice with very little assistance from the hot tub industry itself,” Kay said.
Emotions within the group are still running high said Ms Waterman who says she contacted every major hot tub brand and hot tub industry officials asking for help and only received one positive response that came from Don Elkington, the owner of Canadian-based Coast Spas, she said.
“The UK Hot Tub industry is pathetic; they left it to us consumers to prove our case while they were ready to duck.
“Yet it is they who stand to gain through increased sales now this rogue trader has been driven out,” she said.
Pool & Spa Scene was the first and only industry magazine to exclusively break the story of Trade Price Group back in June this year after a tip off from Mark Anthony, of Spas and Landscapes, a Coast Spas dealer.

Read more stories like this in Pool & Spa Scene magazine…