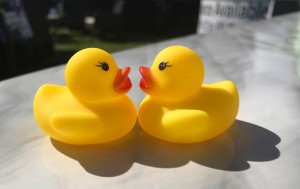 Aqua Warehouse, the UK’s leading supplier of rubber ducks to the trade, moved to reassure spa dealers following negative reports on the cleanliness of the popular bath-time toy. They poured cold water on hygiene claims pointing out that their superior stock was not affected. Several national media titles carried the report claiming researchers from the Swiss Federal Institute of Aquatic Science and Technology, experiments on six identical bath toys in the laboratory. “Fungi were identified in 58 per cent of all real bath toys and in all dirty water control toys,” they wrote in a paper published in the journal Biofilms and Microbiomes. “All bath toys analysed in this study had dense and slimy biofilms on the inner surface.” None received a clean bill of health. A large number and variety of bacteria and fungi had colonised the ducks’ interiors: 75 million cells per square centimetre. Potentially disease-causing bacteria were identified in 80 per cent of the bath toys, including legionella. Commented Aqua Warehouse’s John Mabey: “We are satisfied by the quality and integrity of our supply of sealed ducks. “Of course we would always recommend the common sense approach and it would be wise to replace display ducks on a periodical basis. John adds “the scare stories failed to dampen sales with record numbers of ducks going out of the door this season.”