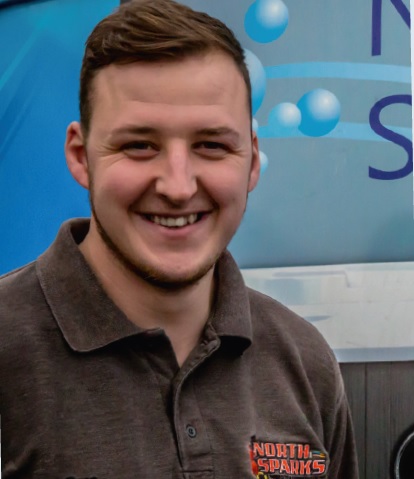 Ryan Mason heads up the North Spas electrical team. He specialises in all aspects of electrical installations and revamping old spas into working and useable products. In 2016, Ryan and his apprentice electrician Dean – who also happens to be his brother-in-law – took care of over 90 per cent North Spas’ electrical installations. Ryan was also named as a finalist in the Pool & Spa Technician of the Year category at the 2016 UK Pool & Spa Awards.

Tell me about your role within the North Spas team?

In a nutshell, my role is to install a safe and compliant power supply to every hot tub we sell. I also undertake the lighting plans for larger projects and provide assistance to technicians with complex electrical faults.

What do you enjoy most about your job?

I enjoy working within a close-knit family-run business and I take pride in ensuring all work is completed to the highest standard.

What are the biggest challenges you face?

Often a hot tub is the final piece of the jigsaw in a house the owners are happy with. Internally it is often finished to high standards and precautions have to be taken to cause as little disruption as possible – customers do not want to have to organise a plasterer and decorator to rectify damaged caused by routing a cable out from the fuse board. The route I take to get a cable to the hot tub is always carefully considered.

What’s been your most interesting experience in the industry?

Probably the most challenging job was for Mr Clift who had an extension built with no access, so we had to create our own access from underneath the floor boards in order to route the cable. This involved removing bricks from supporting walls, which had to be done with absolute precision.

Tell me a bit about your career background? Qualifications?

I actually started servicing with hot tubs while I was still at school. I did some work experience and started at the bottom doing labouring. From there I progressed onto a four-year Apprentice Electro Technical Technology course and then registered with the NICEIC in 2014. To maintain my membership my work is inspected annually. I’m also registered with Checked & Vetted, a company which allows my customers to submit reviews.

What’s the best piece of advice you have been given? And by whom?

The best advice I have ever received from my dad is about the importance of being a team player but also being able to work individually. I have played football from a very young age so I am used to working as part of a team however, I play in goal and whilst playing a match there is only one goalkeeper in a team of 11, so therefore I am also more than capable of carrying out solo tasks.

What are your goals for the year ahead?

Both work and personal. Work goals would be to grow the electrical side of the company and maybe start to think about bringing on another apprentice once Dean completes his apprenticeship. Personal goals, I am just getting my own house and recently got engaged so planning a wedding and running a house will take up a lot of my time!