Nothing as run of the mill as an Open Day or Open Weekend for the retail team at UK Leisure Living, who instead opted to host Wales’s First Hot Tub Expo.
A steady stream of ‘hot tubbers’ passed through the doors of the showroom in Mocdre, Colwyn Bay and took the opportunity to listen to seminars and grab a bargain purchase.
“Wow what a weekend and I am so proud of the team putting on a great show,” commented Gareth Jones Managing Director of UK Leisure Living, also trading as Hot Tubs North Wales.
“We welcomed hundreds of people through the door and it was a pleasure talking hot tubs with them.” Gareth and his team received water leisure supplier support from Elite Spas, Darlly Europe and Rotospa with two other suppliers The Caravan Estate Agents and W Fire Pits and Ironwork pitching in. Over the weekend, seminars were held daily by Kevin Sanger of Elite Spas, as well as Dorian Davies from Darlly Europe. Gareth Jones MD delivered two presentations himself.
Gareth said: “It was great delivering the seminars and passing our expert knowledge on to guests. We had great feedback on the event and everyone learned something. I would like to thank Kevin and Dorian for their support and all the great people who attended and made the event such a success”

Explaining his rationale behind the high-profile event Gareth explained: “I wanted to do something to put us on the map, generate awar 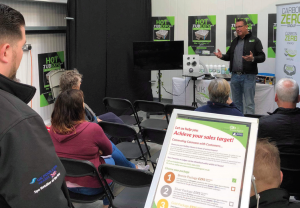 eness and of course drive sales.” The event was aimed at people with and without hot tubs with four seminars daily ranging from advice on:

• What to look for when buying a hot tub
• HSG282 and Holiday Cottage Compliance,
• How to get the most out of spa filter
• Chemical Master Class

Return on sales was very worthwhile with Aspen Spas outnumbering Hot Spring sales by about ten to one.
“Such was the success of this event, we will soon be announcing a date for 2020,” Gareth revealed who is hoping to develop the Hot Tub Expo concept even further.
Gareth also unveiled plans for two new satellite showrooms going live very soon. He also revealed that for family reasons, the company are hoping to work with Macmillan Cancer Support with the availability of a hire tub for those undergoing cancer treatment to make their lives a bit less stressful during a worrying time.