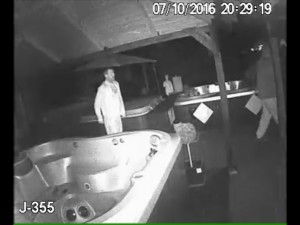 Euphoria Lifestyle was the victim of a double robbery after thieves stole £50,000 worth of hot tubs in two separate break-ins. The first raid took place on Friday October 7, when two Aquavia hot tubs were stolen from the Euphoria Lifestyle showroom in Washington, West Sussex.

Three of the four hot tubs have since been recovered by Sussex Police but one, the Aquavia Aqualife 5, is still missing. Three people have been arrested and released on bail pending further enquiries.

The shocking acts were captured on CCTV showing the burglars helping themselves to the hot tubs. On one of the video clips, the criminals can be seen looking at the hot tub descriptors and prices. The Euphoria Lifestyle team believe this is a key sign that the theft was not opportunistic and the thieves were aware of exactly what they planned to take during the burglary.

Managing Director Mike Robinson commented: “We are urging all spa retailers to be on alert and to look out for any contact requesting spare filters for an Aquavia Aqualife 5. It’s a unique sized filter that’s not readily available and they are supplied with 3-month disposable non-cleanable filters with a screw thread. Querying the serial number would be ideal to help track down the spa – assuming it’s still in the UK.”