What a difference a year makes. Now a distant memory, the outdoor show season last year was a wash out with several shows cancelled under a deluge of torrential downpours that turned show fields into precarious mud rings. In complete comparison, this year’s challenges involved finding shade, ensuring plentiful supplies of drinking water and keeping up with demand as the blistering weather heightened interest, across the board, in hot tubs, pools and the outdoor living lifestyle generally. Jacuzzi UK headed the outdoor show season with another classy display at the Hampton Court Flower Show. With planting around a purple theme, this year’s fl oral displays decorated a stage promoting flagship sellers from the Jacuzzi hot tub range. The Oyster Pools team was also flying the Jacuzzi flag with a 14th successive appearance at the Royal Welsh show, reporting brisk business on its water leisure stand. Hydropool have reported strong show sales including appearances alongside Yorkshire Hot Tubs at the Yorkshire County Show. Meanwhile, Hydropool got a further boost from the hardworking team from Complete Spas in Worcestershire. They kicked off their show season with the Three Counties show at Malvern, the first of four show dates for the team this year. Oozing professionalism, across in East Anglia, the Wensum Pools team staffed not one but two stands at June’s Norfolk Show with separate displays of Jacuzzi and Elite spas. “We had two staff on each stand and the competition between the two stands was fun,” says Wensum’s Andrea Morrison. “Large display boards showing photos of the showroom and enclosure got lots of pool leads and people knowing the Wensum name,” she adds. To read more, please subscriber here. 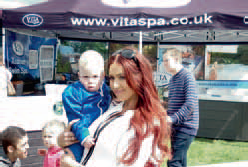