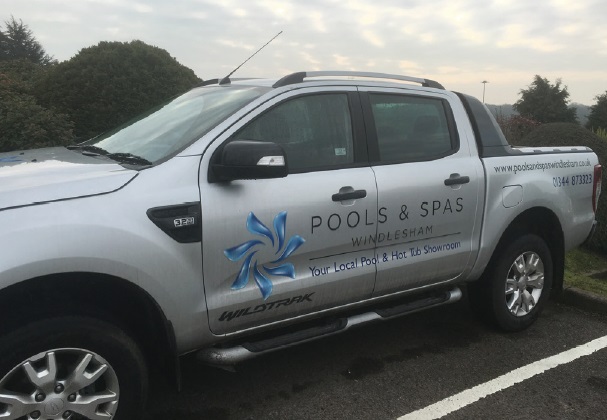 Once used to distinguish between battling armies, the use of colour and imagery to represent a nation or a house insignia has waned. But livery has endured and adapted to become one of the most useful tools in the modern-day business advertising arsenal.

The ability to share a business’s branding over the course of several years on what is effectively a portable billboard, is a technique that is becoming even more utilised. For hot tub and swimming pool companies, livery-laden vehicles offer cost-effective mid-scale advertising with numerous long term benefits.

“Although it is hard to determine exactly how many people see adverts on vehicles daily, it has been estimated that up to 3,000 people will see your mobile adverts every day,” estimates Steve Moneypenny, from Vinyline Graphics, a company that has specialised in vehicle livery for over 25 years, with a process known as ‘wrapping’.

“A wrap is usually a one-off payment, making it cost effective, rather than paying to renew your advert,” Steve adds. “Using the best vinyl and vehicle films, livery can expect to last up to five to seven years!” The process itself takes between two and three days and involves stripping the car down before applying any artwork and designs, meaning it can be a longer process to begin than online marketing but the costs are invested over a much longer period.

To find out more about how wrapping can benefit your business, read the full article at Hot Tub & Swim Spa Scene.