Never before has SPATEX reached out to such a large audience. Its list of partnerships and collaborations has now reached 23 including many prestigious domestic and international names such as the Swimming Teachers Association, the Pool Water Treatment Advisory Group and The Institute of Swimming Pool Engineers.

Never before has SPATEX reached out to such a large audience. Its list of partnerships and collaborations has now reached 23 including many prestigious domestic and international names such as the Swimming Teachers Association, the Pool Water Treatment Advisory Group and The Institute of Swimming Pool Engineers.

As an added bonus this year, the UK Trade & Investment (UKTI) will be staffing a stand at SPATEX 2013 and giving exclusive talks on how it can help businesses break into export markets.

In its 16-year history, SPATEX has raised and distributed £1.2 million with £90,000 going to (ISPE) the Institute of Swimming Pool Engineers another £675,000 went to the trade associations SPATA and BISHTA and the BSPF. A further £415,000 was given to Pool Industry Promotion (PIP).

Before SPATA and its forerunner, the Association of Swimming Pool Contractors (ASPC), started in the 1960’s, the industry had no central core, no common purpose. Then along came SPATA and later BISHTA, creating the standards by which pools and spas should be built and providing a Code of Ethics for ethical trading.

SPATEX was created as the trade’s showcase, with the express intention of ploughing all profits back into the industry. Hence the phrase, ‘By the industry, For the industry’ was born and has since become synonymous with the exhibition. The exhibition existed and continues to exist purely for the promotion and lobbying of the industry.

A statement issued recently by the SPATEX organisers, aimed to emphasise the importance of the annual budget injection from SPATEX.

It read: “With no profits from SPATEX, there would be little chance of funds for PIP to promote the industry to both the trade and the consumer media. “There would be restricted opportunities for the BSPF and other relevant companies to lobby, on the industry’s behalf, at home and abroad.

“In the past two years, this may have ended up with no UK representation during the initial stages of drafting the European Standards for domestic swimming pools and no one will be driving forward plans to start domestic standards for European Hot Tubs and Swim Spas.” 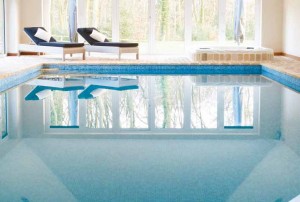 Patrick Thorpe, chairman of Certikin International urged the industry to turn out for the Brighton event saying: “SPATEX and Certikin complement each other and, in many ways, share the same ethos. Both are focused on the promotion of technological advances in the industry.

“In Certikin’s case, its primary purpose is to manufacture and supply to its customers products which are innovative, proven to be better than their counterparts, and of premium quality. “SPATEX, on the other hand, is the showcase for everything that is happening in the industry as well as a breeding ground for the development and exchange of new ideas. Generally speaking, if it’s new and an important addition to the UK wet leisure industry, you can guarantee that you will see it first at SPATEX.

Mark Ramsden of Complete Pool Controls agrees: “SPATEX is a fantastic showcase for our products and, because all its profits are ploughed back for the greater good, we feel it is important to support the wider industry. Helping to make the industry stronger will benefit us all.”

UK Divisional Manager for the Pollet Pool Group, Carl Porter comments: “For us, SPATEX is about forging and cementing customer relationships, not hardcore selling. Doing deals is a byproduct but not our prime aim for being there. The show is well- organised and good value and, as a company, we enjoy taking part in all the peripheral activities and networking opportunities, such as the Gala dinner and the SPATA Awards. For us, attending SPATEX is a must!”