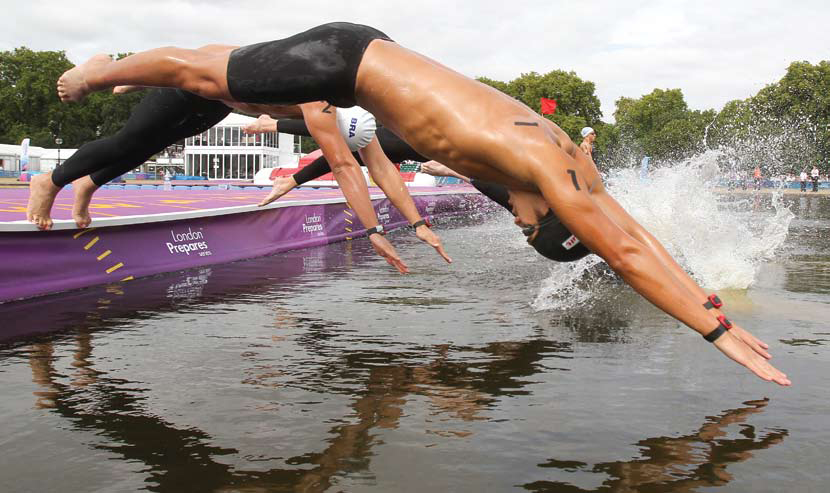 While it made its debut in Beijing in 2008 with th introduction of men’s and women’s 10km races, it is a throwback to the first modern OLynpic Games in Athens in 1896.

With the London Olympics almost upon us, these are exciting
times for swimming in the UK and the swimming pool industry as
a whole.
At five key training centres across Britain, competing
swimmers are working flat out before they go for gold – and
already swimming pools are seeing a dramatic increase in interest,
particularly amongst youngsters.
Watching highly-trained athletes competing in any sport
engenders real enthusiasm in young people aspiring to achieve
the pinnacle in their chosen sport.
The spotlight falls on the pool when television screens across
the world show the likes of Tom Daley and Rebecca Adlington
proving themselves the best at what they do.

Tom Daley, Double Commonwealth Diving Gold medallist and
2012 hopeful, did the first dive in the completed Olympic pool. He
said: “Doing the first dive in the Aquatics Centre was an incredible
privilege. Only a few years ago, this was a distant dream. I can’t
wait for the honour of representing Team GB.”
The London Olympics is, first and foremost, a showcase for
Britain, British talent and British construction techniques and
organisation.
CLASS OF 2012
British Swimming looks to better results in every four-year cycle.
As a benchmark, Britain won six medals in Beijing with 21 finalists.
There are no official targets but a haul of two or three medals is
definitely on the agenda.
If the class of 2012 are true to their potential, it should be a
memorable Games for Britain in the pool. Beijing double gold
medallist Rebecca Adlington will be joined by a powerful group of
female swimmers, plus world-beating backstroke specialist Liam
Tancock.
In the 10km event, Team GB won two silvers and a bronze in
Beijing, half of all the medals available. Two golds are more than
possible at the London Games.
As well as Rebecca Adlington, the ones to watch in the pool are
Gemma Spofforth, Fran Halsall, Lizzie Simmonds, Joanne Jackson,
Jaz Carlin and Liam Tancock while in the 10km, listen out for KeriAnne
Payne, Cassie Patten and David Davies
OLYMPIC CIRCUS
But once all the fuss has died down how will the much-hailed
promises of the ‘legacy’ impact on London and Britain, after the
Olympics circus has left town.
“Swimming is one of the
26 sports that will benefit
from the Olympics being here,”
enthuses 2004 Athens bronze
medallist Steve Parry, who
founded Total Swimming – a
company dedicated to educating
youngsters about swimming.
“The facilities we have in the
UK are excellent and after every
Olympics there is a dramatic
increase in people taking up all
kinds of sport – especially swimming.
“The legacy of these Olympics is likely be a ten-fold increase in
people taking up swimming.”
Three million people across the UK go swimming every week,
according to the latest statistics.
David Sparkes, chief executive of British Swimming, says:
“The Games will capture the nation’s interest and swimming will
feature strongly throughout the Games. This will, in our view,
encourage many to think about going back to swimming or
learning to swim for the first time.
“It is important that everyone in the industry is ready to
respond to this massively increased interest in swimming.”

To read the remainder of this article you need to subscribe to Pool & Spa Scene!