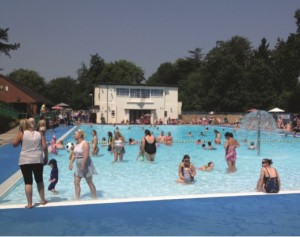 Sizzling summer temperatures provided a welcome boost for the country’s water leisure sector. The high temperatures sent young and old alike flocking to open air swimming pools and lidos in an attempt to cool off. In fact, searches for water parks, lidos and beaches increased by an average of 277 per cent between June 19 and 23,  according to Day Out with The Kids website.

The site’s top viewed attractions became dominated by those in the water category for the first time, with some attractions seeing more than a 1,000 per cent increase in page views. The capital’s lidos were heaving – with Londoners queueing as early as 7am for a dip. Around 400 people lined-up to get in to the popular Tooting Bec Lido and hundreds descended on Sandford Lido in Gloucestershire at 4.30am on the longest day of the year for the annual Sunrise Swim. Droitwich Lido in Worcestershire had the best start to the season it could ever have hoped for, with around 1,000 visits every day during the heatwave. The sustained sunshine also put a spring in the step of many  service and maintenance companies who were hard-pressed to cope with demand.

Pool installers also say they are delighted with numbers of new-build enquiries. M Clark Pools was one of the many beneficiaries of the extended spell of fine weather. Luke Clark, Managing Director of the pool building company said: “The heat generally gets people thinking about the outdoors and their pools. Usually if the weather is good we are much busier and we got up to 34 degrees. “We noticed an increase in interest regarding new projects and current customers wanting pools opened and works done.”