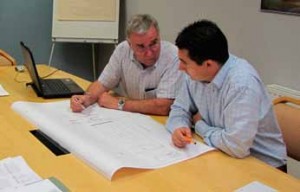 With the UK under the stewardship of newly-elected Conservative leader, Margaret Thatcher, 1989 was a landmark year for a number of reasons including the felling of the Berlin Wall, golfer Nick Faldo becoming the first Brit to win the Masters, Arsenal winning the then first division while Band Aid were asking Do They Know It Is Christmas? It was also a stand-out year for the UK pool trade with the creation of Hydrospec, a team that boasts an unrivalled reputation as one of the UK’s premier swimming pool specialists – undisputed masters of refurbishment with a penchant for breathing new life into tired old pools.

Based in Essex but carrying out work all over the UK, some 25 years on and the Hydrospec team is celebrating its silver jubilee and Christmas with a combined celebratory mini cruise for all their staff. This year has also seen Hydrospec founder John Cheek confirmed as a Fellow of the Institute of Swimming Pool Engineers.

“I do get frustrated with companies that do not have the same standards of professionalism that we work to,” declares John. “We will never be the cheapest company to quote for pool work – but we will always offer the best value,” he emphasises.

Hydrospec’s 11-strong team includes several new trainees as the company continues to invest in the future. They service and maintain on a contract basis nearly 90 public pools plus many schools and hospital pools and specialise in Hydrotherapy pools.

“We are conscious, as a company, that we have a responsibility to continue to invest in the sort of skills that are specialist to the swimming pool field,” says John. “Because of this learning and sharing is on-going throughout the whole team from top to bottom.”

Hydrospec makeovers are not just cosmetic master pieces, invariably involving the upgrading of energy efficient plant room and environmental control systems to modern standards. As well as public pools, the company is increasingly being asked to rescue school pools, many dating back to the Sixties and Seventies, when enthusiastic parent, teacher associations fundraised and shelled out for school pools with little or no forethought leaving a legacy of problematic pools with no foundations, non compliant dangerous fittings and minimal consideration for health and safety.