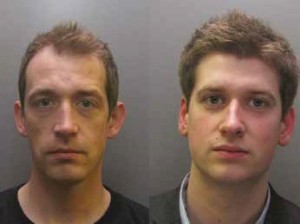 Internet fraudsters who pocketed more than £600,000 from online shoppers for hot tubs, saunas and other luxury products which failed to materialise have been jailed for a combined ten and- a-half years. Brothers Ross and Luke Quinn, from Coxhoe, a town a few miles from Durham, accepted orders for goods which included sheds, saunas, furniture and ride on mowers through a number of different websites over a five year period, only for the goods to either not be delivered or in some cases arrive faulty, incomplete or different to those ordered. In the region of 400 complaints were received from across the UK in relation to the various items, leading to a joint investigation and prosecution by Durham County Council and Durham Constabulary. The total loss suffered by consumers was estimated at £625,000. Teesside Crown Court heard how Ross, 30, and Luke, 27, both living at Beechfield Rise, were, from 2009 to 2014, linked to websites in the name of seven businesses which purported to sell projectors, saunas, hot tubs, tub chairs, ride-on mowers, sheds, cabins and hand dryers. These businesses included Electro Star, Planet Distributions, Red Saunas, Tub Furniture, Ride Mow, Super Hand Dryer and Tool Shed Shop.

During a trial last year Luke Quinn pleaded guilty to one count of fraudulent trading and four counts of tax evasion. Ross Quinn pleaded guilty to one count of fraudulent trading and seven counts of tax evasion. The sentencing hearing was told how the goods were advertised at very low prices, as being in stock with a short delivery time. The court heard that in the five year period approximately 400 complaints were received, with the total loss suffered by consumers being around £625,000. Ross Quinn was jailed for six and a half years and banned from being a director for 13 years and three months. Luke Quinn was given four years in prison and banned from being a director for nine. The court heard of the failure to pay taxes due to Her Majesty’s Revenue and Customs in respect of Luke totalling £62,000 and for Ross £333,000. Speaking after the case, Durham County Council’s head of environment, health and consumer protection Joanne Waller said: “The paying public has every right to expect that items they order online will be delivered and exactly as described. “A significant number of complaints were received from consumers either not receiving the goods they had ordered or in some cases getting faulty, incomplete or different versions of the products. The combined financial loss suffered by those online buyers was substantial. “We do not tolerate fraudulent businesses operating from County Durham and we are therefore satisfied with the lengthy jail terms and the bans from acting as a director handed out in this case which will surely act as a deterrent to anyone thinking they can make money by fraudulent means online.” A Durham Constabulary spokeswoman added: “We hope this sentence acts as a deterrent for anyone who believes they are above the law and thinks they can make money fraudulently.”