When Roy Howard, of Howard’s Hydrocare in Essex, heard what his customer really thought about his new DEL Moon automatic slatted cover kit, he nearly choked on his tea… Asking his engineer for the customer’s feedback, Roy was told: “Forgive me, but the customer said he’s over the moon.” One of the latest pool cover developments from the industry’s leading innovator, French company DEL, and available exclusively in the UK through Golden Coast, the new cover, which features DEL Moon end pieces, was an instant success with Roy’s customers and staff. He said: “Our engineers found that this unit is so much more straightforward to fit.” Although you can buy either electric or solar-powered versions, it was the latter that cheered Roy’s fitting chaps. He explains: “One of the best things about the unit is its solar powered. The solar cells charge the batteries, so there’s no disruption to the surround and no digging up of paving stones to hook up the electrics. It’s all self-contained in one unit. “It really gives you leeway in the fitting process. In the past we’ve actually had to weld or fabricate end-pieces to make them work. “But with this one, the guys said it was absolutely fantastic. It took four and a half hours for two guys, which includes cutting the stones, fitting the unit and installing the cover. It’s the way the DEL Moon kit all fits together that made it such a nice job.” 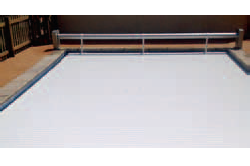