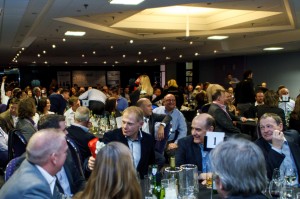 Water leisure specialists from across the UK have once again raised the bar in the hotly contested UK Pool & Spa Awards 2015.

This year’s competition attracted 131 entries from 60 companies including some of the country’s leading swimming pool and spa providers.

“The jury of judges have unanimously expressed their praise for the outstanding range of projects and venues that speak volumes for the high standard of swimming pool and spa provision not only in this country but overseas,” comments Christina Connor, editor of Pool & Spa Scene magazine, the independent publication behind the annual competition.

“The standard of entries was extraordinarily high this year and we were delighted that the awards racked up over 1,800 online votes – setting a record for the public voting.”
Winners across 21 categories were presented with their trophies at a special business networking and promotional evening in January, held at the NEC in Birmingham.

Making a popular return visit to the event, the awards presentation was hosted by Olympic medallist and BBC sports personality, Stephen Parry, who runs his own mobile pool business, Total Swimming.

Stephen commented: “Having spent most of my life in and around swimming pools, the pool and spa sector is particularly close to my heart.

“I’m amazed by some of the outstanding projects that have been recognised in this year’s UK Pool & Spa Awards line-up. The industry as a whole should be very proud of its achievements this year.”