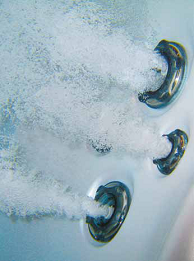 Rules on displaying hot tubs in shops and public places should be reviewed, according to a Health Protection Agency (HPA) report into a fatal outbreak of Legionnaires’ disease.
Meanwhile, the British and Irish Hot Tub Association (BISHTA) is being urged to act, in partnership with Trading Standards, to cut the risk of further outbreaks. The HPA report said a hot tub on display at JTF Warehouse in Stoke-on-Trent was the probable source of last year’s outbreak.
As reported in previous issues of Pool & Spa Scene magazine, two men, Richard Griffin, 64, and 79-year old William Hammersley, both died and 19 other people caught the disease.
The HPA stressed the potential health risk of hot tubs posed that are not properly maintained: “This was a significant outbreak and has raised questions on the acceptability of operating spa pools (also known as whirl pools and hot tubs) in public places where the general population has access,” the report states. “Spa pools are known to pose a risk of Legionella if water systems are not rigorously maintained, properly managed and subject to regular chemical controls. “Operating spa pools on display in indoor spaces, even if not used for bathing, have been previously shown to be the cause of outbreaks in other countries,” the report CONTINUED.