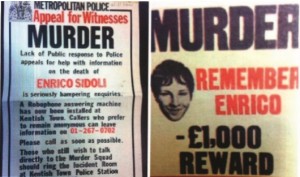 A £20,000 reward is being offered by the Metropolitan Police for information regarding the death of a 15-year-old boy in a London lido over 40 years ago. Enrico Sidoli died in hospital in July 1976 after being pulled unconscious from Parliament Hill Lido in Hampstead, 11 days earlier. Detectives are now offering an incentive for further information after witnesses claim Enrico was assaulted and then thrown in the pool and held underwater for a period of time.

The Met’s Special Casework Team are now revisiting the case and hope to trace a key witness – a man that can be seen moments after Enrico was recovered from the water.