The UK swimming pool industry lost one of its ‘larger than life’ characters with the death of Joe Smith recently aged 70.
Best known as the founder of the Premier Gunite Company, Joe had a reputation for working hard and playing hard; enjoying nothing more than celebrating success with a story or two from the swimming pool construction front-line.
Joe was born in Coatbridge, a suburb of Glasgow in 1945. He lived there for some years, developing the local accent, which never left him and would became part of his larger than life persona.
After leaving school at 15, Joe followed his father working in a local coal mine.
However, it wasn’t long before he decided that working miles out under the North Sea wasn’t for him. He left home and travelled down to Southampton to find a better way of earning a living.
Joe stayed in Southampton’s Church Army Hostel as he didn’t have the money for accommodation and gradually picked up jobs, mainly in the construction industry which held him in good stead when later on he became involved with sprayed concrete, constructing pool shells for Anchor Pools in Camberley.
Eventually Joe moved on, becoming a partner and director of Tenders International, undertaking prestigious work on palaces and government
buildings in Saudi Arabia even working on the Cormorant A oil rig in the North Sea.
Joe then formed Premier Gunite and went on to construct pool shells for numerous pool companies throughout the UK.
Business became even brisker when, by client request, Joe was asked to take on entire projects, leading to the formation of a second company, Heritage Pools, a consistent winner of SPATA awards.
Our best wishes to Joe’s wife Barbara, daughters Joanne and Annabel and Joe’s family and friends. 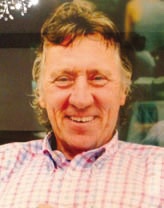