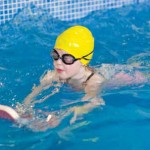 One in three children is leaving primary
school unable to swim, according to a report
by the Amateur Swimming Association (ASA).
Of those who cannot swim, nearly two
fifths (39%) have never been offered lessons
at school.
It means around 200,000 youngsters leave
primary school unable to swim each year,
with 75,000 of them never being given the
chance to learn, the report suggests.
This is despite swimming being part of the
national curriculum for seven to 11-yearolds.
The national curriculum states that
children in this age group should be able to
swim unaided for at least 25m.
The ASA is calling for every child to learn
to swim in primary school, with better
training for teachers and robust monitoring
of lessons by Ofsted.
Swimming should also be given priority
in school budgets, help should be given to
secondary school children who cannot swim,
and more should be done to keep school
pools open, the association said.

It warned that with recent figures showing
that drowning is the third most common cause
of accidental death of children in England it is
concerning that many youngsters do not know
how to swim.
The report also reveals that without school
swimming lessons, many more children
would not learn the skill. One in six parents
never takes their child swimming, it says.

TO READ THE REST OF THIS REPORT SUBSCRIBE TO POOL AND SPA SCENE TODAY!