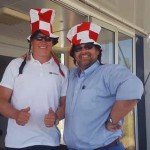 Retailers across the country made the most of the exceptional summer weather, taking part in county and district shows. Elite Spas were out in force supporting dealers with their displays. “We feel it’s incredibly important to our dealers that we support them with the shows as we still feel it’s a great way to market the products,” commented Elite’s Issy Sanger. “We even support with exhibition trailers and spas when we can’t personally be there as we now have three separate show rigs. “We had a new exhibition trailer built this year for the major shows and it’s performed really well and as a general rule, we try get as many spas and swimspas on display that will fit the space. 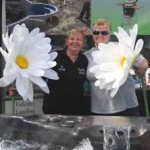 Elite reported huge interest and record figures with Cornwall topping the league of best sellers. Issy revealed: “Our Aria II and Oceana II have been best sellers this year so far at £7295 with only about 25% sold on finance.” Aqua Warehouse, with its combined American Whirlpool brands, made a major investment in their very own show trailer for Aqua Warehouse to undertake more shows in 2018 themselves. “It’s has certainly helped having a large colourful trailer rather than pop up tents, it’s given us a much more professional appearance, an appearance the customers have appreciated, especially with cold water in the fridge,” comments Graham Message of Aqua Warehouse. The team display four spas and two Covana lifts at each show with the backdrop of their new colourful trailer behind. Says Graham: “We have been pleased with the sales and we have found our average sales price has risen to what we use to achieved at previously shows a few years ago. “We have been incredible fortunate to have been blessed with the best summer in years which has helped, although at times it has been too hot,” he adds. 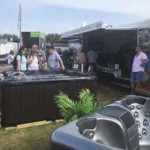