Above ground pools were the come-back kings of 2013 as at last a real summer arrived on UK and northern European shores.
It was a case of fortune favouring the brave, namely those who had invested in stock, as specialist pool and spa companies struggled to keep up with demand. Retailers were dusting off old stock as an all-points bulletin was issued for the last above ground swimming pool in the country.
Although it was a slow start with a disappointing May and June, weather experts calculated the temperatures in July and August were the hottest for seven years.
It wasn’t just the temperature gauges that were rising. For the first time since Easter 2012, the International Monetary Fund lifted its economic growth forecast for the UK.
Still lacking in confidence, new pool builds are believed to be at a record low with both consumers and commercial clients alike, keen to receive quotes for pool and spa projects but nervous about taking the plunge.
Instead it was refurbishments, both residential and commercial pools, that continued to provide the lifeblood for the core.
Also on the plus side, service for both pools and spas, as well as exercise pools, all performed well in 2013.
As we head into 2014, wholesalers will be looking for a knock on bonus as they try to tempt retailers to replenish the stock that was finally sold out in the summer.
Predictions for 2014 include an increase of interest in nonchlorine water treatments, increased dependence on automatically controlled dosing and monitoring and a boost in wellness lines such as sauna and hydrotherapy. 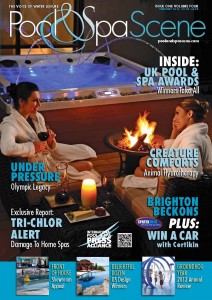 February 2013
With on line voting influencing the decision making for the first time ever, Pool & Spa Scene revealed the winners of the 2013 UK Pool & Spa Awards following a sell-out awards presentation at the Crown Plaza hotel at Birmingham’s NEC.
Pool & Spa Scene team also examined the true legacy for swimming in the wake of the London 2012 Olympics with our special report, Under Pressure, focusing on the newly built pools across the country and government funding for swimming since the Olympics.
The Pool & Spa Scene ventured into the lucrative sector of Creature Comforts as we looked at the growth of animal hydrotherapy and went Front Of House as we looked to maximise the potential of both indoor and outdoor retail space.
Pool & Spa Scene exclusively reported on concerns over increased sales of Tri-Chlor tablets to unwitting hot tub owners and published a Delightful Dozen winning projects in the latest US design awards. 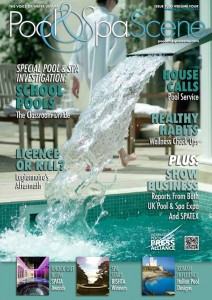 April 2013
Award winning companies were the toast of our April issue, as Pool & Spa Scene covered the winners of the SPATA and BISHTA awards. We also included more information on the winning projects in the independent UK Pool & Spa Awards.
On other matters, the Pool & Spa Scene team went back to school to expose the dangers posed by a worn out pool stock in our School Report. We raised calls to tighten controls on the hot tub industry following the deaths of two men from a poorly maintained display spa in our special report, Licence Or Kill. We also looked at maximising the potential business from residential pool and hot tub service and maintenance in our House Calls feature. 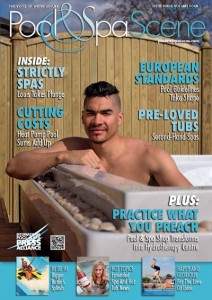 June 2013
Olympic silver medallist Louis Smith featured on the front of our June issue. Fresh from his Strictly Come Dancing victory, Louis proved a hot promotional prospect for Peterborough-based Posh Spas Ltd.
Pool & Spa Scene invested the potential markets from preloved hot tubs retailers; discovered the Love Of Lidos and visited a company that was Practising What It Preached by transforming its showroom into a day spa.
We examined how leisure venues could be saving money and reducing payback periods and by Cutting Costs and we immersed ourselves in French pool design with the latest award-winning projects from the Federation of French Pool Professionals. 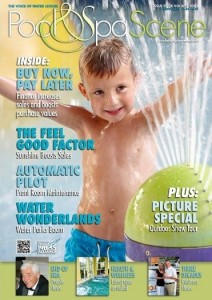 August 2013
In August, the Pool & Spa Scene team was enjoying the Feel Good Factor as the markets soaked up the best summer season for nearly near five years. We stepped into Water Wonderlands as we looked at the booming water park sector and discovered the benefits of automatic control on both residential and public pools by switching to Automatic Pilot.
The Pool & Spa Scene embarked on a UK tour of county shows and events as we presented a roundup of roadshow appearances of a cross section of UK retail teams while discovering how Buy Now, Pay Later schemes were helping to boost both spa and pool sales. 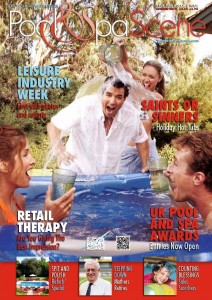 October 2013
The Pool & Spa Scene team proudly announced that Stephen Parry would be presenting the 2014 UK Pool & Spa Awards as we opened up the entry process for companies in the industry.
Keeping up our reputation of breaking new ground, Pool & Spa Scene balanced the positives and negatives of the holiday hot tub sector with our special report, Saints Or Sinners.
We urged pool and spa retailers to give their indoor and outdoor showrooms a makeover with our feature on Retail Therapy.
Pool architecture and design was a key theme of the issue, featuring an interview and in depth look into award-winning company LA Architects. In Spit and Polish, we looked at refurbishment projects by some leading pool companies with a close up look at Channel 4’s Grand Designs swim spa project in Lincolnshire.
As the only magazine to exhibit at the show, Pool & Spa Scene was the first with pictures and reports of Leisure Industry Week in our special show report, Wave Makers. 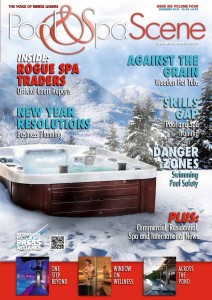 December 2013
In the December issue Pool & Spa Scene’s court reporting team exclusively revealed details of alleged rogue trading by former directors of Spaserve – an internet selling team.
We looked through a Window On Wellness with the latest options for sauna and steam and gave the inside track on New Year Resolutions for the water leisure sector.
The Pool & Spa Scene team also went Against The Grain with a look at wooden hot tubs and exposed the Skills Gap as we uncovered the shortfalls in current pool and spa training.