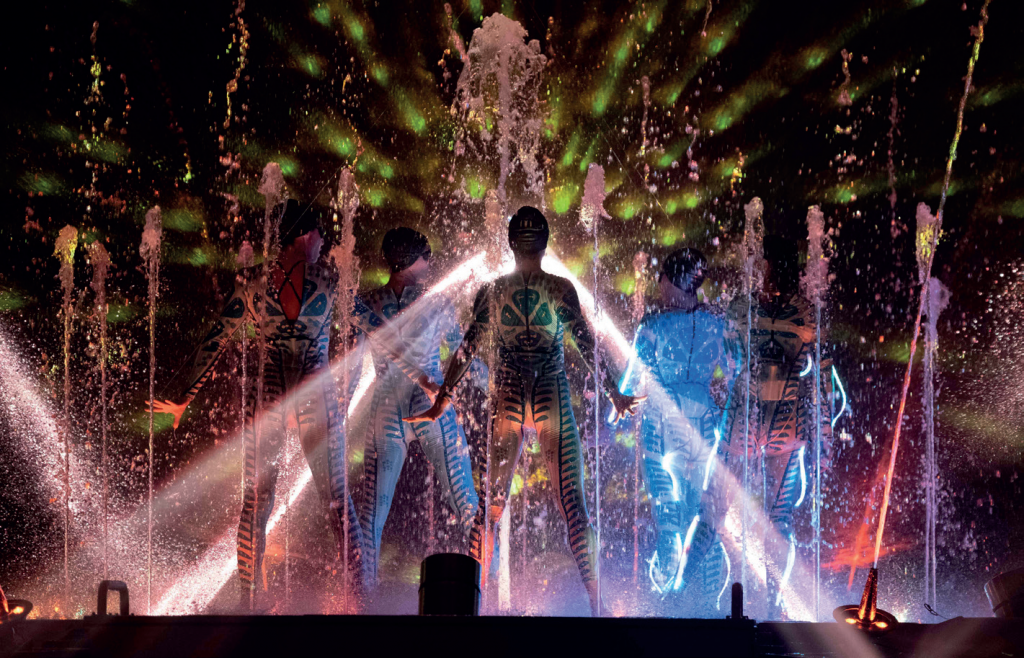 Fluidra celebrated its 50th anniversary with an unprecedented water show in the swimming pool at Club Natació Atlètic Barceloneta (CNAB), an event attended by some 900 spectators. The show, which told the story of Fluidra’s meteoric rise over the past five decades, was designed and directed by prestigious artistic director Franc Aleu, winner of the most recent Catalan Regional Government’s National Culture Award (Premis Nacionals de Cultura). The event also featured a performance by the Kallipolis Club artistic swimming team, which was directed by Anna Tarrés, former coach of the Spanish national team. The impressive light and musical show, a convergence of art and beauty with science and technology, also showcased Fluidra’s most advanced technological solutions, including underwater LED lighting, dynamic water screens, multi directional nozzles, parabolic and dancing fountains. The event was organised by Bea Strebl’s team at Fluidra, with Julián García and Héctor Cruz hosting the event at the CNAB.

FOUNDING FAMILIES
Established in 1969 in Barcelona, Spain, by the company’s four founding families, for half a century Fluidra has grown internationally across both the residential and commercial pool and wellness markets. Fluidra´s Executive Chairman Eloi Planes comments: “Since our humble beginnings 50 years ago, putting our customer first has been a core value at Fluidra. “Our company has grown dramatically over the years, but we remain as committed as ever to this value. “We´re proud to be part of this incredible industry which provides happiness and wellbeing to millions and it´s been an honour sharing our journey with all our customers around the world”. As Eloi Planes puts it: “With a 50 year heritage of excellence, this is just the beginning.” Throughout its history the company has gone through many changes, always continually learning and adapting to the markets´ needs. Following its initial success in Spain, the company saw the huge potential in bringing its products to a wider, international customer base. During the 1970s, the company began its international expansion in France and Italy while the 1980s and 1990s saw the company focus on consolidating its business in Spain and expanding internationally, opening subsidiaries across Europe and the Middle East.

GLOBAL FOOTPRINT
As the company’s global footprint further expanded between 2000 and 2010, Banco Sabadell acquired 20% of the share capital in 2002, entering the Board of Directors. In 2003, the company was responsible for the freestanding Olympic Sky-pool at the Palau Sant Jordi in Barcelona for the World Aquatics Championships. Four years later, the company went public when Fluidra became listed on the Spanish Stock Exchange. During the global financial crisis Fluidra restructured its activities in Europe and entered new foreign territories, creating an efficient and agile company. In 2018, a historic milestone took place when Fluidra merged with Zodiac, enabling the company to offer a wider range of products and solutions than ever to their customer base.