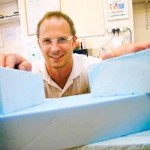 Pool insulation specialist, Thermapool, has won a Green Apple Environment Award in the national campaign to find Britain’s greenest companies, councils and communities. The company, based in Essex, competed against more than 500 other nominations and will be presented with their Green Apple Award at a presentation ceremony in the House of Commons in November. As a result of this success, they have been invited to have their winning paper published in The Green Book, the leading international work of reference on environmental best practice, so that others around the world can follow their example and learn from their experience. They will also be considered to represent their country in the European Business Awards for the Environment. The Green Apple Awards began in 1994 and have become established as the country’s major recognition for environmental endeavour among companies, councils, communities and countries. Thermapool has seven different swimming pool insulation systems on the market, only two of which are the subject of a current patent dispute, as highlighted in the August issue of Pool & Spa Scene. Thermapool director Nigel Rose is looking forward to going out to Africa to oversee the installation of a Thermapool system on one of their latest large projects, a fourth floor, 20m x 8m tiled swimming pool with a 20m infinity edge being built as part of a £11m development in Kampala, Uganda.