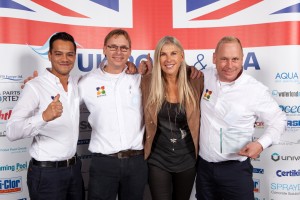 The team from Netherlands-based Passion Spas was given a standing ovation as they collected the 2016 Special Achievement Award, at this year’s UK Pool & Spa Awards.

The company has been struck by a devastating fire at the end of July that effected 65 per cent of its site; damaging millions of pounds of stock.

Within 24 hours of the fire a temporary office location was established, which has led to a seamless transition for the continuous supply to European dealers. A new pre-delivery inspection building was constructed and a new 60,000 sq. ft. showroom has also been erected on site to cater for the company’s European retail operations.

“Following the serious fire at their headquarters in Holland this summer, Passion Spas have proved their resilience in the face of adversity,” awards presenter and editor of Hot Tub & Swim Spa Scene magazine Christina Connor told the sell-out audience, as Passion Spas collected the award that this year, was sponsored by AstralPool UK.

“In business it is all about challenges and pressure,” she continued. “Passion Spas showed remarkable strength of character in their pro-active and professional response.”

The memorable awards evening, held at the prestigious Vox venue, part of World Resorts within the NEC, celebrated a memorable year of successes with more than 20 companies picking up top accolades. Gold, Silver and category winners were presented with their trophies and certificates at the prize-giving ceremony by Olympic swimmer Sharron Davies MBE.

Notable winners on the night included North Spas, who won the Hot Tub Project of the Year category with a residential installation of a South Seas 627m hot tub, which involved a the demolition and removal of the existing hot tub to make way for the new model.

For information on all the winners visit the awards website.