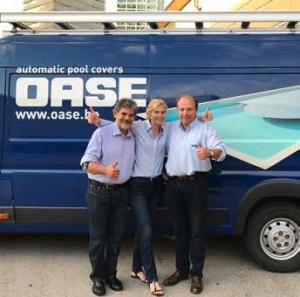 ideas were at the very least eccentric, responding with disbelief at such a preposterous notion. Some 50 years on and Oase automated pool covers are installed on an estimated 10,000 pools in 25 countries with export accounting for nearly 70%of the turnover.

“My father had retired from his bicycle company and wanted to put a cover on our family pool,” recalls Frederic, Bertrand’s son, who now overseas Oase production and distribution. “If it was good for us, it was good for other pool owners,” Frederic continues. “It was an uphill struggle to convince the pool market of the safety and energy benefits of a slatted cover especially when that cover was almost as expensive as the pool itself,” he explains. After creating the first motorised cover in 1968, it was not until four years of hard slog later that Oase was able to introduce the product to the general public for the first time. Still, the idea was met with scepticism but in 1973, following the oil crisis, opinions began to change. The product range was still limited until Frédéric joined the company in 1991. “Solar slats had seen the light of day,” recalls Frederic. “The slats were painted black on the bottom side to ensure better absorbtion of the sunlight, but also to avoid too much algae growth underneath the cover. Tubular motors were still nowhere on the horizon.”

Working with companies like Piscines du Nord in Marcq-en-Baroeul (France) and BTU Pool Services in Woking the UK, Frédéric developed the company’s export side, reaching near European neighbours but gaining a following in countries as far away as Russia, Australia, China and the USA including a prestigious residential quarter project at Hong Kong’s The Peak development. By 1998, Oase had earned its international credentials. Constantly expanding activities required a more robust infrastructure so the offices and production facility relocated to extensive new headquarters in Proven, Belgium.