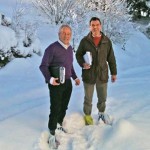 The residential pool market once again found itself a hostage to fortune with disappointing weather being blamed for a difficult summer season for most.

Chemical sales were significantly down for most as well as seasonal sales of lines such as above ground pools and toys and games.

The UK experienced the latest in a run of mediocre or poor summers which started in 2007. It was the coolest August since 1993 across Scotland and Northern Ireland, but similar to August 2010 across England and Wales. There was over twice the average amount of rainfall in the eastern half of Scotland and in northeast England.

For more on this story see Pool & Spa Scene Magazine